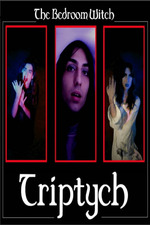 With Tryptich, The Bedroom Witch takes the visual album genre into the realm of Argento and Lynch, telling a somewhat elliptical story through song and poetic narration that deals in passion, betrayal, projected identities and the home/houses.

Taken by tracks: the first third or so, which includes the opening narration and the track "The Lovers," worked the least well for me. On rewatch I imagine it will click better, but the ambiguity of the narration coupled with the static shot of The Bedroom Witch performing the song made it feel a little slow. Which is perhaps overselling it; the way that shot is intercut does work to create dynamism, and the first great image (a hand pulling back some sheets to reveal a hand) comes in this section.

The graphic match fade that introduces the second segment, dominated by "To Get Over Heartbreak," works well. It matches the motion of pulling the sheet with hands digging in dirt, which takes us from the hermetic space of "For Lovers" to the more grounded and social, but still eery and dreamlike, space of the next song. This is where everything starts to click for me, I think. The way The Bedroom Witch starts to move here feels more confident, and the introduction of other actors gives her the ability to play off them in subtle but important ways. Probably the best example is the slight difference in her facial expression after she cheek kisses her dinner guests; each moment is only a split second before a cut away, but it feels like she's genuinely reacting to people within the narrative. This might be the strongest segment, which helps because the song is probably the best of the three.

"This House Is No Longer" opens with a wildly long shot of The Bedroom Witch staring (for reasons I will not spoil) into the camera, fading in and out over an image of her leaning out a window (and elsewhere) in a loose white dress, and that shit really works for me. This section is dominated by really confident images; that window, her coming up the stairs, her face being smeared with blood by disembodied hands, a church (or church-like building?) at night. She's back to being alone, but in a way that feels significantly more confident. Because of that, I'm excited to see what this team of folks (or some permutation of it) does next.