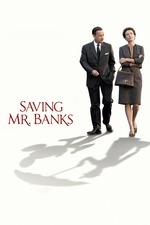 These are the events leading up to the production of Mary Poppins. Emma Thompson plays author P.L. Travers who doesn’t want her work made into a film by Walt Disney (Tom Hanks) for fear that Disney would ruin it. After 20 years of pushing, Disney finally gets Travers to come to L.A., and that’s where our story begins.

Travers gets overly involved in the minutiae of the the film, poring over every detail and refusing to sign away the film rights until it’s all laid out as she would like. It becomes Disney’s goal to get her to back down.

This is probably exactly what you’d expect from a Disney-made biopic about how charming Walt Disney was. Hanks and Thompson are very good, as are the supporting cast (not sure about Colin Farrell though) and the level of technical proficiency is high. This is a very well made picture.

However, the script is schmaltzy and repetitive. One constantly gets the feeling that the story being told does not portray the real events. The flashbacks to Travers’ childhood seem often pointless and there as filler. There’s nothing memorable about any of Saving Mr. Banks; it’s a case of tell the story, roll the credits.

A cursory glance at wikipedia shows that contrary to what the film says, Travers was never happy with the film, and ended up scarred by the whole experience. I’m never sure what to make of situations where a biopic is clearly being a bit liberal with the truth. One the one hand you have to make a film entertaining, on the other hand there is some responsibility to not lie to the audience.

In this case however, I think it’s unforgivable; the real story would clearly have been much more interesting to see on screen! Instead of the apparent clash of worlds (that was never truly resolved), we get this syrupy mess. This is not a film that should have been made by Disney.

Most people will go into this with a pinch of salt and if you do, it’s relatively inoffensive. It’s especially worth your while if you want to see Hanks and Thompson do their thing, which I did. However, as a whole, Saving Mr. Banks shows that a spoonful of sugar doesn’t always help the medicine go down.