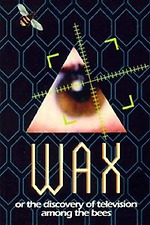 David Blair’s Wax, or The Discovery of Television Among Bees is allegedly the first film ever streamed on the internet. True or not, the film is good enough, and more importantly weird enough that I’m willing to buy it. Filmed and edited digitally (if not a first then an early case), Wax combines elements of documentary, found footage, and experimental computer graphics to create a transcendental visual experience that accompanies a story of science fiction and biblical epic.

Where do you even start? The story here is told entirely in a deadpan voiceover from Blair himself. Blair talks for the entire 90 minutes, never once taking a break in-between sentences for more than 5 seconds or so, bombarding us with information about a drone-pilot who inherits his grandfather’s hyper-intelligent bees who send him on a journey through time and space. He goes back in time to the Garden of Eden, forward to The Land of the Dead, through space to the Planet of Television, all to become a type of Cain figure who assassinates his grandfather’s brother? Don’t ask.

The delivery makes it impossible to really follow and process everything that goes on. Blair doesn’t talk quickly, but because his delivery is so monotone and unrelenting the information just kind of washes over you. It’s a nearly meditative experience, and in a lot of ways the delivery fits the themes. Keen readers of the Bible point out that if someone saw an Angel as they were described in the Bible that they would look like this and speak in a voice that would drive people insane. So it fits that the protagonist of Wax, who is presented as a type of gnostic figure who met god on the planet of television, acts as an assassin for bees and now looks like a sphere with four heads is going to talk to us in a way that we can barely understand. If we wanted to hear a real human talk to us for 90 minutes we’d call our grandparents.

I’m a bit shocked that the film was made pre-9/11 during the first Gulf War. It concerns itself heavily with the ethical implications of using drone warfare against unseen and possibly innocent enemies. Blair likens the use of drone warfare to the story of Cain and Abel, in which Cain killed his brother but was then protected from retribution by god. The film references William S Burroughs early on and it very much did take a lot of inspiration from him. Wax’s sense of esoteric paranoia feels like something Burrough’s could have written himself.

I’m just barely young enough to remember a time when the internet was a kinder place to stuff like Wax. When Wax was released in 1991 it and its supplementary website were things that websurfers could have come across and had no explanation for. You found and watched something like Wax and had no idea if it was a joke, the work of literal insanity, or possibly a document into the truth that the CIA are trying desperately to hide from you. These days everything is explained. Googling Wax brings up a Wikipedia page, a New York Times article, and half a dozen pages reviewing it as the work of art that it is. The mystique is somewhat gone, but thankfully the art remains.

Wax is available on both David Blair’s Vimeo and YouTube