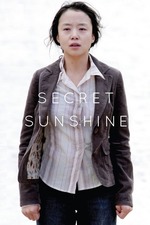 Lee Chang-dong is a fucking master. His realism, combined with stunning character work, with supreme touches of subtlety and ambiguity, continue to blow me away. The first third expertly navigates the tension between an established community and a newcomer. There's the issue of presentation: she offers a storekeeper advice on redecorating her poorly lit store to attract customers; Song Kang-ho doctors a fake award to attract customers to her piano school; a teacher offers the kids lessons in elocution to present one's best and confident self. The pharmacist has advice on God. Everyone's got a critique of another and advice on how they should live.

Then the second tragedy hits, which might stumble down cliches, but the rest unfolds in only the way Lee Chang-dong could handle it. We're never clear on the whys of the crime: there's no admission we see, no reasoning behind it, no real sense of closure. Jeon Do-yeon (who is just unbelievably good) falls for God as comfort, with a smile and sense of peace that you see on only the most desperate and barely-holding-it-together. We know the dam's going to break on this arrangement, but it happens in such a genius way: the murderer has found God too, who has forgiven and absolved him. How can God forgive someone before she can? Her face does all the work in that moment: the facade has come crumbling, the crutch gets kicked out from under her; if I'm using the same comfort as him, what comfort is that?

If grief is a process, how do we get through moment to moment, especially when the deep meaning that everyone around you has found, fails? Distraction, usually. Sex with the pharmacist, or anyone, really. Some light shoplifting. Raining on the parade of the converted by blasting "Love is a lie." A suicide attempt, looking up, asking God, "Do you see? Are you looking?" The desperation is so palpable, and the combination of director and actor here is mesmerizing. In the end, all we can do is clean up, cut our hair, and appreciate the sunshine.