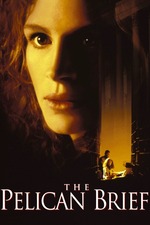 Something is off about this movie right from the jump. First, the protest scene of every interest group all mashed together, you know, the way protests work. Then, two Supreme Court Justices are murdered, while the President and his staff display the urgency more akin to a bridge closing, and Sam Shepard and Julia Roberts just kinda shrug and then have a very normal conversation and kiss. Two Justices are dead! I had a law class the day after Scalia died of natural causes and we talked about it the entire time! There are no sirens, no "Mr. President, we must get you to a safe location." Just another day in Washington! An early signal as to how off the tone is.

Pakula, seemingly the master of paranoia, seems to have lost his ability to build an actual atmosphere in this one. Maybe it's because we get too many peaks behind the curtain too early, maybe it's the stodgy direction or the obvious lighting, maybe it's how there's no score or real sense of urgency most of it. Something is lost in translation, it feels completely lifeless and like the air has been sucked out of it. Julia and Denzel have little of their movie star charms, hampered by whatever direction Pakula was giving to "speak in hushed tones, always, even when it doesn't really make sense to." Historically cornball ending to boot.

The President is going to appoint judges to help his oil exec campaign contributor? How quaint! And the proof that the oil guy hired the assassins? Pretty fucking weak conspiracy, if you ask me.