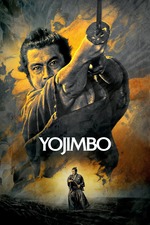 Yojimbo is simply masterful, perfectly crafted entertainment, utterly satisfying. Toshiro Mifune is hilarious and endearing as the crafty ronin, joining the ranks of my favorite facial performances in film alongside Elliott Gould in The Long Goodbye and Giulietta Masina in Nights of Cabiria. While I love Leone's films, I've gotta give the nod to "Sanjuro" in this film over the more reserved Eastwood take on the Man With No Name, especially in the direct remake, A Fistful of Dollars (for what it's worth, For a Few Dollars More is my favorite of that trilogy, and it's probably not a coincidence that Lee Van Cleef's character there more resembles an older version of Mifune's character here).

Masaru Sato kicks things off with a dynamic, almost eccentric title theme, tipping the hat to the drama of its stakes and the moral concerns of our man in the string melody while underpinning it with an invigorating swagger. His score continues to pump up the excitement of Sanjuro and the games he plays with the bastards running the town.

The compositions by Kurosawa and cinematographer Kazuo Miyagawa are some of the best I've seen in his filmography, with one brilliant example occurring early on: a low-angled shot with Sanjuro observing an ostensible showdown between two camps, otherwise empty, as they nervously creep into frame.

Everybody is on their A-game here, and it's an absolute treat to watch.