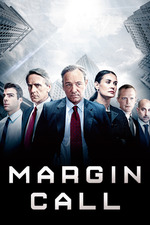 sometimes brilliantly tense, but it fails to achieve what probably can't be done in the first place: to wed human pathos to the contradictions of a system. How do we make sense of the world under capitalism? The caprice, the avarice, the cruelty—this mundane trough of pain we're all meant to feed at. I'm not sure that we can. At best we can interpret and then dictate what it feels like to live inside it. The financial crisis of '08, in this regard, is both an excellent backdrop for our extra-modern dilemma but also a quagmire where narrative goes to die. We've seen from the manic, maximal info-barrages of THE BIG SHORT that the true dramatic core of that moment is slippery and can be only half-contained by the straight-laced aesthetics of Hollywood filmmaking. It's challenging enough to express the volatility of a paradox with only dialogue and text; to do it with Kevin Spacey is probably even harder.

I can't fault the directors and screenwriters too much. The financial crisis begs for moral explanation, but as a crisis of banking, what human motivation can ever truly be claimed? Like so many deathly shocks under capitalism reveal themselves to be, the '08 meltdown was both intended and accidental, god-sent and man-made. It wasn't 'supposed' to happen, but it did. And the film's best moments take advantage of this liminal arrangement, teasing out dialogue and behavior while the existential terror curls up and suspends itself in the corner of the room like a bat. When this is clicking, it's a ruthless chamber piece, but as it drifts into documentation and study, into the realm of explanation and self-awareness, it quits. There's really nothing there. And my guess is that the filmmakers partly know this, since what they've created is a plot indifferent to its ensemble's various attitudes: the fallout will be what the fallout will be and the characters are merely there to decide what gets tossed into the water first.

But they search for more, and on that path towards some purgative human release it finds both too much and too little. The characters are quickly weaned off of the tick-tick-tick of the plot and dissipate soon after. Probably as they should. They do not matter. They're interchangeable. Because while we may man the boats, only tides carry the waves.