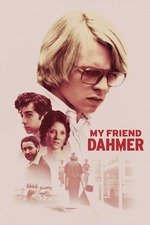 Incredibly told story of a lethargic misanthrope (who sometimes, twistedly and effectively, reminds us more of Napoleon Dynamite than a serial killer... this is how his friends see him) made tense from frame one, simply by knowing his future trajectory. Gus Van Sant couldn’t have done it better— which I say because I think this goes on the shelf next to much of his work. What’s terrifying is how uncomplicated Dahmer is portrayed. Mundane and simple, he’s not a puzzle that needs to be decoded. He’s a lot like other disaffected teens (though he’s clearly sick, as indicated by small increasingly disturbing actions that gain frequency), and this movie does a great job of showing how and where his path gradually diverges from his cohorts, and it does so without making about a singular event that pushes him over-the-edge. It’s subtle and frighteningly effective. Some great performances and filmmaking— amazing and surprising choices (love that quiet indication that he gets an erection during his physical). Where the hell is Ross Lynch???