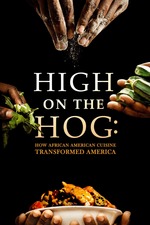 High on the Hog: How African American Cuisine Transformed America 2021 ★★★½

Not just for food lovers (not that we can quite imagine how non-foodies see the world.) This is a moving and important program in may respects, based on Jessica B. Harris's book first published a decade ago. It'll be eye-opening even for viewers who've studied the roots of the food we love in the U.S. and how much of it was brought to these shores and/or popularized through the innovations of Black chefs. High on the Hog (the title derives from the way many of the dishes we enjoy today are the results of Black chefs having to be innovative with the parts of the pig the slavemaster left them) takes macaroni 'n' cheese and barbecue, just to name two "for instances" Karolyn and I couldn't do without. In the first episode Harris and the host, Steven Satterfield, journey to Benin in West Africa. He walks in the footsteps of men and women bound for America as slaves (Benin was a center of the transAtlantic slave trade). He takes a canoe ride through the lake village of Ganvie. The rest of the series is the story of what the African people brought with them as they spread throughout the new land in the diaspora. The next episode takes us to South Carolina and North Carolina: the Sea Islands of the Gullah-Geechee islands and the Low Countries. It's got some breathtaking imagery, but it almost can't not have that, as Julie Dash and the makers of Daughters of the Dust discovered. I hadn't realized that this part of the country is one of the foremost rice producers in the country, if not the world. (I hadn't associated rice production with Africa, either.) This episode tells the tale of Carolina Gold, that is, rice—nearly as much a part of the foundation of our country's wealth as was cotton, turns out. The moments when the beautiful Gabrielle E.W. Carter talks about how her family is being forced off their land to make room for a freeway are tremendously moving. We visit Monticello: Thomas Jefferson was an aesthete who loved not only great French wine but also French cooking; his enslaved chef, James Hemings, yes, that Hemings—brother to Sally, with whom Jefferson famously fathered children—was an accomplished chef of French cuisine whose recipe for macaroni 'n' cheese, derived from the French, was much beloved by Jefferson and is the basis for the food we Americans love so much. Karolyn professed enteral love for Ms. Hemings. To see historian Dr. Leni Sorensen cook the original recipe in Monticello's original kitchen (it was called "macaroni pie") is a highlight.
We head in the next episode to New York City to learn of Thomas Downing, owner of a beloved 19th-century oyster restaurant in Manhattan. Considered delicacies today (including by Karolyn and myself), oysters were the common man's food at one time. It's due to Black chefs that we know how beautiful oysters can be. We hope to get to Ben "Moody" Sharney's "Mother Shuckers" cart next time we're in NYC—he's trying to keep Downing's legacy alive. While we're in the area, we learn about Philadelphia's Robert Bogle, a butler who's the founder of modern catering. Then there's Hercules, George Washington's enslaved chef, who escaped in 1797 and is rumored to have lived out the remainder of his days in New York City. Satterfield feels for any lingering signs of Hercules' trail: we can feel the repercussions of the past, vibrating in the air and just under the paving stones, if we know where and how to look. The skein of today is just a palimpsest: traces of the past are written everywhere. The final episode takes us to Texas and features cooks keeping the history of mouthwatering barbecue alive. Satterfield attends a rodeo under the auspices of the great Black cowboy tradition of the Northeastern Tailriders. Satterfield makes it all quite personal. A distinguished sommelier and food writer by profession, he's not slick and in fact he seems a bit at sea sometimes. He uses that to his advantage: he's honest about it. His commentary on the food is often what you or I might come up with, along the lines of "yum." What he does do tremendously well is show the emotion of what learning about this food and history evokes in him, in terms of both personal-historical and world-historical level: it awakens memories of his childhood. He evokes the joy it brings him and the show evokes the joy the food brought the world. He's the right host for the show. My biggest critique: they don't go to New Orleans. In terms of carrying forward African cooking traditions, I would've thought nowhere in the US embodies that idea more. To be fair, you have to stop somewhere, and New Orleans really deserves its own series. Still, this is a truly important show. It's part of the ongoing project of forcing an honest accounting out of this deeply ignorant, stubbornly amnesiac country. Go to New Orleans in Season 2, "High on the Hog" producers! In short, if you've read Deep Blues you've traced American music back to West Africa, and if you've read Blues People you're familiar with the theory that the music is the history of the people. High on the Hog proposes that food is the history of the people as well, and, like the music, you can trace it all back to West Africa. (If it comes to that, all of humanity, all of us, has its roots in Africa.)