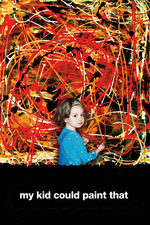 The best documentaries tend to start with one compelling question, only to unexpectedly run into several even more compelling ones— usually out of sheer luck, and often turning the film into something entirely different. My Kid Could Paint That already had a great angle for examining the controversial world of modern art. By following a child prodigy whose paintings start to sell for thousands (or tens of thousands) of dollars, the film initially offers a unique window into arguments about the value of art in general, abstract art in particular, and the potentially predatory ecosystem around it. That’s a fascinating enough topic, yet those questions only intensify when a 60 Minutes piece casts doubt on who’s really responsible for the paintings. Luckily, director Amir Bar-Lev is shrewd enough to take that as a cue to probe even deeper; not only does he explore issues of authenticity and subjectivity, he questions his own role as a documentarian in shaping this family’s narrative.

The personalities involved suddenly become more fascinating as well, especially the girl’s mother. She’s clearly more painfully conflicted than her impenetrably insistent husband, and it becomes obvious she was strong-armed into the position she’s now stuck defending. Though while the film does confront the couple about their truthfulness, it doesn’t settle for just holding them to the fire. Bar-Lev allows his motives to be challenged by a journalist (who has reservations about her own role in the family’s notoriety), and some of the most uncomfortable moments come from the gallery owner and various collectors grappling with this new development. The scene where a reluctant buyer is essentially coerced into buying an obviously poor painting— one that just so happens to be the only one the child was filmed making– has as much excruciating pathos as you could cook up in a script.

Bar-Lev never quite resolves what his responsibility is to this family, who keeps inviting scrutiny by returning to the seductive world of gallery openings and giant paydays. But the open question of how little Marla will eventually feel about all this hangs over every scene. The answer is beyond the scope of this particular film, but however it turns out, Bar-Lev makes it clear how everyone played their part: from the parents to the media, from self-justifying opportunists to collectors genuinely moved by [fill in the blank]’s work. It’s a tangled web that touches on parenting, commerce, art, and everything in between, without exempting the documentary itself. The filmmakers couldn’t have planned any of it, but they sure knew what to do once it fell into their laps.