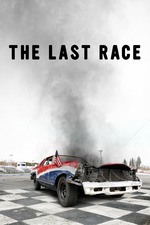 The Last Race is my kind of documentary: immersive rather than informational, intimate yet highly visual. In other words, if you want to learn about the nuts-and-bolts of stock car racing (me neither), that’s what Wikipedia is for. Michael Dweck’s film explores the visual rhythms and colorful personalities around the last such track in Long Island, coming away with something both visceral and emotional. Nonfiction is rarely so thrillingly cinematic, whether via unexpected camera placement, classical music, or dreamlike slow (and fast) motion.

Sometimes the hypnotically extended shots focus on unexpected points of view: the mouth of an announcer; the long, tense moments inside a car before taking off; the “last race” itself, which never leaves the face of one driver. The showstopper is a long, sped-up shot circling around the track focused not on the cars, but the audience, weaving closer and further away. It doesn’t go fully abstract like 2012’s superbly avant-garde Leviathan, but this is ultimately a human story, well-served by the evocative camerawork.

Dweck also spends time on the hobbies and daily lives of his blue-collar subjects— one engrossing sequence is just one weekend-racer killing a hive of bees at his day job. The plainspoken elderly couple that owns the track makes a poignant emotional center; the point is made simply through the time we take to watch the unloading and assembly of their walkers for their heroic route to the office. The film acknowledges encroaching corporate development without getting didactic about it, but that’s just another detail in the milieu. The real subject is the strangely poignant pull of the track. And whether it’s purely visual, or in the keenly-observed, painfully-human moments of pride, rage, or bonding, that’s a pull even I can understand.