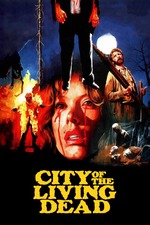 “Lady you’re either on grass or you’re pulling me leg.”

Been going through a debilitating depressive episode lately so just needed some sweet, sweet gnarly exploitation cinema to bring me some joy. This worked wonders.

Fulci is a king of gore, sure, up there with HGL without question, but he’s also a master of controlling atmosphere, his sense of location and his kaleidoscopic sense of character is, I suspect, the real source of his brilliance, he is a student of Tourneur in that he captures an array of characters and their connections through a single space, the politics of relationships is underplayed unlike Jacques’ films just because he was so intent on private property, but in its place is a genuine sense of the spirit of flesh which binds us all together, and the psychic relationship we have to our bodies. Fulci’s horror is physical, psychological and scenic, he’s a damned master.

Also, bopping soundtrack. The tune at an hour and seven minutes deserves a club remix.

Too Old to Die Young