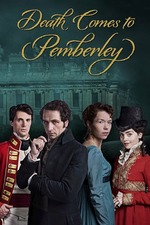 Among the many merry appropriations of Jane Austen in the last decade or so, this BBC adaptation of P.D. James’ crime sequel to Pride and Prejudice is singularly sombre. Opening some five years after Elizabeth Bennet has become Elizabeth Darcy, it’s set at her new home of Pemberley, where an unexpected visit from Lydia, Wickham and Denny on the eve of a ball precipitates a murder in the adjoining wood, and sends Darcy’s ancestral property into lockdown mode. Apart from Mr and Mrs Bennet, who arrive slightly earlier and hover around the fringes of the action, these are the only vestiges of the Bennet circle that we really encounter – there’s no Kitty, no Mary, hardly any Jane, no Bingley, no Charlotte Lucas, and not even Mr. Collins (although Lady Catherine de Bourgh does make a memorable appearance). In other words, the series is centred on the characters most touched by Darcy’s relationship with Wickham - and given that’s the closest Austen comes to a Gothic relationship, or at least a Gothic sense of the past, it’s perhaps not surprising that the series mutates Pride and Prejudice into something of a Gothic lifeworld as well. Five years down the track, Lizzie and Georgiana Darcy both seem entrapped by Pemberley – Lizzie, in particular, is pallid and dwarfed, a ghost of her former self – while everything is constrained by a kind of doomy romanticism, closer in spirit to Persuasion than any of Austen’s other novels, but exceeding even that as the iconic 1995 BBC score is revamped and reimagined in a host of minor-key motifs. Of course, that produces a certain claustrophobia, but it also evokes the outdoors in a way that is quite alien to Austen’s literary style, with most of the key scenes taking place outside, either among manicured gardens whose reassuring geometric co-ordinates are totally eviscerated by director Daniel Percival’s billowing Steadicam, or within the sprawling wood at the fringes of Pemberley itself, which feels positively primeval in its looming, unregulated disdain for Regency sightlines, transmuting from a wood to a forest to a jungle with each step away from Darcy’s property line. If the 1995 series transformed Pride and Prejudice into the most life-affirming, feel-good novel in the Western Canon, then Death Comes To Pemberley suggests that it may have taken a considerably mooder, gloomier mindset to produce the novel in the first place, a mindset in which everything outside Austen’s hallowed “two inches of ivory” suddenly feels like a crime scene. As a result, watching it is a bit like like witnessing Austen’s sparkling characters gradually emerge, resplendent, from the murky Gothic-Georgian matrix within which they must have gestated for so many years, in something like a comedy of premarriage, a reckoning of all the frustrations, disappointments and restrictions needed to lay the foundation for this most perfect of literary couples.