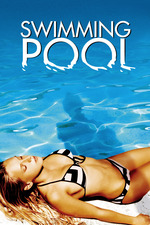 Some of the most memorable thrillers have emerged as allegories of writer’s block, and Swimming Pool is no exception. On the face of it, the story’s familiar enough: Sarah Morton (Charlotte Rampling), an English mystery novelist, needs a change of scene to break through her creative deadlock, so she retreats to her publisher’s house in rural France. Upon arriving, she finds his estranged daughter (Ludivine Sagnier) living there, and the tension between them drives the film towards its final twist. In some ways, that twist isn’t so hard to see coming, but it’s also not really where the film’s eeriness lies, as Ozon more or less subsumes suspense into Sarah’s tentative, burgeoning relationship with her new environment. From the very beginning, there’s such an exquisite attention to Sarah’s body language that the French house only emerges as a series of minute changes in her distinctive tics, postures and gestures; for the most part, it feels as if the house has travelled to her body, rather than vice versa, continually recalibrating itself against across the surface of her skin. In thrillers of this kind, inanimate spaces often become psychologised, repositories of unspoken or unorthodox thoughts and desires, but here Ozon goes a step further – this house is physiologised, kinaesthethically attuned to sensations and palpitations that not even Sarah can fully articulate, even or especially in her writing. And just as her body language is continually on the cusp of coalescing into writerly postures, so Ozon’s spaces feel like they’re about to be articulated, about to be visualised – they have all the deep richness of a creative vision just before it’s captured. So the house disappears as Sarah’s novel proceeds – it’s an act of erasure as much as creation – which means that something about her disappears as well, if only because the house knew her better than she knows herself. Like watching someone write themselves out of existence, then, it’s often hard to know whether Sarah’s the disappearer or the disappeared, or both at once, making for a quite natural companion piece to Under the Sand, as Ozon diffuses Rampling to a slinky Anglo-French liquidity, a point of transition, translation and departure.