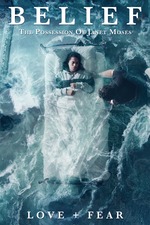 The lifting of a Maori curse, or mataku, from Janet Moses, her death apparently caused by her family in 2007 and subsequent court case caused a huge stir in both the media and the law of New Zealand at the time. David Stubbs’ powerfully intense docu-drama attempts to probe the heart of the family crisis and investigates what drove their faith in drowning their own daughter via religious cleansing in the family home.

Never sensationalising, as much of the media was wont to do during the coverage of the case, Stubbs takes the court transcribed testimony directly from those who were a part of the events and reconstructs them with an clean storyteller’s eye for tension and raising of stakes. At the forefront of the film is Stubbs’ insistence that this is neither straight documentary nor twisted for the sake of his actors to tell any sort of The Exorcist style tale. Within the shooting style, as well as the story structure, the deep rooted spirituality is captured and realised with a deep heavy sense of foreboding and regret, adding a very present sense of urgency to the drama. The score also weighs heavily on the vice-like grip of this film’s mounting dread.

The story given here paints Janet as a symbol of repression from many directions – her family, the local iwi (who we found out in Q&A afterwards the family actually distanced themselves from), state, formal religion and society in general. The cast are all excellent, giving passionate, considered voice to each family member. Kura Forrester as Janet, tackles a terrifying, rocky role with conviction and manages to steer the feel of the core away from horror tropes. It’s maybe a bit longer than it needs to be and the point-of-view seems to skew back towards the known events given by the media at the end, but this is still an excellent unpacking of this particular case and examination of group hysteria in highly extreme conditions. Recomended.