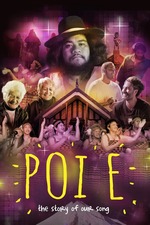 Poi E: The Story of Our Song

Any cynicism I held about the politics or situation going into this was swiftly swept aside early on by the sheer good natured humour and terrific sense of pacing.

As well as being a document of the song and the times, director Tearepa Kahi augments otherwise flat moments with intimate clips and nostalgic footage with all of the different media at his disposal to create a surprising visual collage poem that should be required viewing for every kiwi.

It does flit a little too quickly over the death of Dalvanius (although we certainly feel the depth of the loss), takes a non-controversial stance on the politics of the time (but neatly eschews the potentially cringey intro at the Royal Gala from Rolf Harris), and does seem to stumble a couple of times on its own nostalgic logic.

But those are minor quibbles at what is an absolutely top-notch insight into one of the cultural marker-points of late-20th-Century New Zealand pop culture.