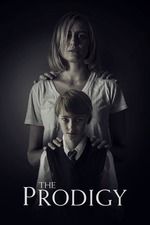 When director Nicholas McCarthy and Taylor Schilling said in promotional material that "The Prodigy" wasn't afraid to tackle really heavy topics, I thought it was just marketing. I was wrong.
"The Prodigy," just like last year's "Still/Born", is a complete "feel bad movie" where the cruelty of its villain never ceases to shock us.

The rules are simple and followed to the letter. I love it when a movie is straightforward and doesn't break its rules to please the general public.

Unfortunately, it suffers from various clichés of the "creepy kid" subgenre and horror in general. Jumpscares are predictable and dated. The best of them is spoiled by the trailer (just like what happened with "Annabelle" and its very similar jumpscare).
In the end, the horror is figuring out how bad things can get.

The biggest highlight is young actor Jackson Robert Scott ("IT") who can switch personalities and expressions with great credibility. His character, who suffers from a different kind of possession, says and does some things so shocking that I don't know how they got permission to film this with a 10-year-old child. Even more disconcerting than the fate of his Georgie in 2017's "IT", for now he is the monster.

"The Prodigy" isn't afraid to go to really dark places and although several cliches of the "creepy kid horror" subgenre are present, the film surprises by the cruelty of its villain and its diabolic ending. A good little addition to a subgenre so worn out.

The Hole in the Ground