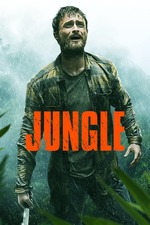 I can't stress enough how grateful I am that the entire Harry Potter craze passed me by up until very recently (this year) and I had several occasions to see Daniel Radcliffe play his heart out without the baggage of that Potter role clinging onto him in my head. It's a bit frustrating to see that in some people's minds, he will never shake that role and it's always "Harry Potter in XYZ" instead of "Daniel Radcliffe in XYZ". As you can see from my ratings for the Potter films, I definitely liked the series (not having read any of the books) but it's mostly the other films in his filmography that should convince everyone of what good an actor Radcliffe truly is already and what a truly great actor he's destined to become if he continues with his role choices off the beaten path. Cue that as my segue into his role in Jungle, which is truly -- in one word -- an achievement.

Although I've yet to see Horns, there are already three great entries in his filmography that show what an ambitious actor Radcliffe is becoming and those are the very atmospheric gothic chiller The Woman in Black, Swiss Army Man with an incredibly arduous turn as a corpse and Imperium, allowing him to show off his impressive "rookie goes undercover" skills.

Newest addition to that: Jungle, which even manages to manifest itself a notch above the aforementioned films, simply because of an incredible tour-de-force turn delivered by Radcliffe, which begins at just the right moment in the film, when you were almost sure that this is simply going to be a routine "untested group dynamic goes haywire" kind of film but far from it. The moment, in which Radcliffe's character Yossi Ghinsberg is forced to embrace the only law of the jungle, which is survival, the movie takes flight and ascends to impressive heights and only slightly comes down during its coda, which simply leaves you baffled that this was indeed a true story as an opening text already boldly emphasized.