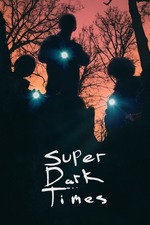 This film was hailed as this year's Donnie Darko and, if you know my love for that particular film, it certainly raised skepticism in me but I still bought a ticket after only seeing brief scenes from the trailer.

Turns out that was a great decision because the result is definitely a magnificent film that is beautifully lensed and superbly well acted by everyone in the young cast, of which everyone feels as authentic and real as the cast of the It remake did, which I saw yesterday.

I guess the impact that the film had on me could best be described as a rope being tied around me with a knot that was increasingly tightened over the course of the film until I almost snapped. After walking out, I suddenly noticed that there is a kind of circular symbolism in the film being prominently integrated by showing extreme close-ups of shower drains, the inside of a portable CD player or a circular diffuser on the ceiling of a grocery store. It's almost like the film wants you to think about the "circle of life" without plainly spelling it out for you.