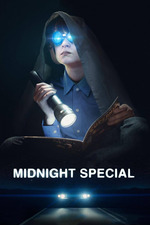 Like any work of art, once it is out of the hands of the artist, it will take on a life of its own. The audience is then free to see it in their own way. And with that note, my perspective is that MIDNIGHT SPECIAL is able to bring a renewed sense of wonder to the immense power of cinema and its ability to transport and elicit an emotional response. Having a child I imagine brings with it a similar type of impact. What will my child grow up to be? What will that child bring to the world? And how will that child change the world in his or her's own, singular way? These questions become even more difficult when we realize that the world can corrupt and destroy any ambition they might have. It is in that way that the parent becomes protective and fears for the child's safety. This response is natural. But we must let go eventually, and when this time comes, it brings with it a feeling of unease as well as a sense of profound mystery of what will happen. This is the main crux of the picture, even if you take away the cool science fiction elements. My favorite aspect however is how filmmaker Jeff Nichols showcases the different belief systems and agendas of the various groups/characters at the center of the picture. Everyone has projected their own purpose and meaning onto the boy with special powers, Alton, in a selfish manner. Even Alton's father Roy, played in subtle, internal ways by Michael Shannon, secretly wants to keep his son for himself, even as he helps him reach his goals. Ultimately though, he makes the sacrifice to let his son go his own way, to find his own purpose and meaning in life. It's just undeniably moving to watch that happen. I know many will find the lack of a concrete resolution difficult, but no matter what doesn't get resolved, the emotional journey is fully realized. Just accept the mystery and let MIDNIGHT SPECIAL in.