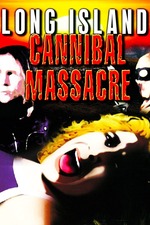 "LONG ISLAND CANNIBAL MASSACRE is Schiff’s A CLOCKWORK ORANGE. His SINS OF THE FLESHAPOIDS. His CITY LIGHTS. The second of four films produced on budgets of less than $500, LONG ISLAND epitomizes the then-teenaged Schiff’s ambition. It’s also his most balanced, and therefore approachable, movie. Like WEASELS RIP MY FLESH BEFORE before and THEY DON'T CUT THE GRASS ANYMORE after, LONG ISLAND still focuses on people lying in the dirt, talking in living rooms, and tearing off faces. But this movie is more substantial. It isn’t burned into my brain because of the outrageous or mundane elements. It’s burned into my brain because it brings together intense enthusiasm, dreamy visuals, and people who use corn flakes and peanut butter as special effects."