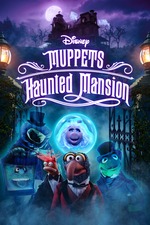 ELECTRIC MAYHEM OVER THE CREDITS!

I was initially bummed that this was only 50 minutes and it feels a lot less "cinematic" than the recent-ish theatrical releases like The Muppets 2011, but upon the (many, many) rewatches, it all vibes like a lovely throwback to the made-for-TV Muppets specials that I grew up borrowing on DVD from the library - something I never thought we'd get to see again. The short runtime and the mostly gag-based plot makes this whole thing feel refreshingly breezy and charming - and also helps excuse some of the lower-budget moments.

If I do have one major complaint, it's that the Haunted Mansion itself never really gets to feel like tangible place because so much of the special uses digital backgrounds, green-screened puppet performances, and artificial camera movement. For a medium like puppetry that's so impressive because it feels so tangible and uses to many practical effects (see: Dark Crystal: Age of Resistance) it's unfortunate that lots of this special has such a sheen of digital fakery, but alas, I'm happy whenever I see the funny nose daredevil stunt muppet onscreen.

Thank god Gonzo was the protagonist so that we didn't have to hear Fake Kermit™ for an hour! I cannot tell you how much I enjoyed that big ghost musical number in the ballroom. Seeing so many creative muppets onscreen never ceases to be the best feeling in the world - and so many fun returning faces! And did I mention that I like that the heart of this special comes from Gonzo? I'm a little neither-here-nor-there on the Pepe The Prawn stuff; Pepe is fun but he's never felt like a particularly dynamic character beyond the basic "heheheh" shtick. Nevertheless, Gonzo's final realization of his fear was such an adorably heartfelt moment that felt like such a callback to the end of Jim's era and some of Brian Henson's early stuff. The simplicity of this whole thing is so refreshing and nostalgic and I want more right now. I nearly cried during the credits. I love The Muppets.