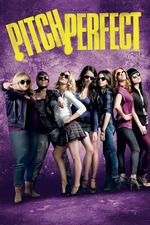 Frivolous and shallow sequels aside, the first Pitch Perfect film is actually a novel and well-directed one. Anna Kendrick is great, the cinematography is solid, the pacing/flow is nice, and the concept is a pretty unique one. It's not the music that makes the film all that great, however. Instead, it's the more sincere human-connection stuff that makes it thoroughly entertaining and (dare I say) meaningful to me every time I see it. It's a silly and exaggerated comedy, sure. But at its core there's a nice coming-of-age story with some wonderful character dynamics along the way, like the one between Kendrick and Skylar Astin.

Are there some bits I don't like, and stupid fart jokes from Rebel Wilson? Oh yeah sure, plenty of em. But it's still a nicely structured film, and as far as American comedies go, I'd consider it a standout in one degree or another.