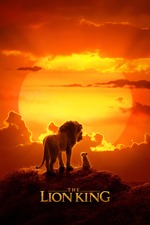 I managed to stay away from this in theaters, but now that it's on Disney Plus, I couldn't resist. When the movie ended, the streaming service recommended I watch this other animated movie called The Lion King! Interesting choice.

These live-action remakes remain some of the most bizarre products of the past few years; on the one hand, they all make zillions of dollars and cause loads of discourse, but on the other, they're almost completely devoid of cultural impact. At least with Endgame, I heard people in real life talking about it for several weeks after its release. With this movie? I haven't heard a soul. And yet it's the second biggest box office hit of the year. Insane.

In many ways this is exactly what I expected, though I must admit, it's a whole lot more unintentionally funny than anticipated. There's a special kind of tonal dissonance that comes from hearing a comedian like John Oliver deliver a bubbly performance while his voice comes out of a soulless bird with absolutely no expressive capabilities. It's so absurd, you have to laugh. The fact is uniquely hilarious that the final Pride Rock sequence could just be the opening sequence replayed again, and you wouldn't even notice because the character designs are all identical and devoid of life. Aesthetically, too, the whole thing blurs together into an ugly light-brown mush of dirt and sky. Gone are the impressionistic colors and vibrantly contrasting environments of the animated version; everything here essentially looks like the dead grass in my backyard in January. Even that massive yellow/orange sunset on the poster next to this review is more expressive and evocative than anything in the movie itself.