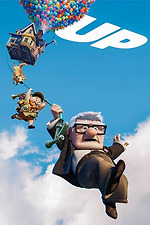 My family went to see Up on my grandpa’s 70th birthday back in 2009. When the movie was over, I remember everyone being ecstatic - and undeniably moved. At age 9, I think it was probably the first time I’d seen my parents shed tears in a movie. My dad immediately dubbed the first 15 minutes of the film “The Robot Test” - because “if you don’t cry in the first 15 minutes, you’re a robot.”

My grandpa, Jim, loved Up more than anyone else. As soon as he’d seen it once, he wanted to see it again. Happy to do so, we all went back to the theater for the second time that day. A few weeks later, my grandpa took his elderly sister to see it. She was not nearly as enamored as he was - I specifically remember the phrase “not my cup of tea” being used - but my grandpa still firmly assured everyone he met that the movie was one of the best he’d ever seen.

There was a certain irony to my grandfather’s love for Up. For many years after that, even when I was still young, I was always struck by the notion that my grandpa embodied the version of Carl Fredrickson before he goes on his adventure. Ya know, the one who just sits around in a chair all day long and doesn’t leave his house.

Still, when my grandpa praised the movie (which was often) and talked about what he loved, it was never the stuff about being a grumpy old man. He loved the adventurous stuff. He loved how the old man bonds with the kid. He loved the talking dog, and the giant blimp, and how they save the bird. And, especially, he loved the scene where Carl releases the balloons, escapes the retirement home guys, and flies away.

My grandpa died in September, from lung cancer. It wasn’t the worst - or the most sudden - death in the world, but I don’t know if I could call it ‘peaceful’ either. Pardon my contrivance, but what death is ever peaceful?

When we had my grandpa’s funeral in October, the whole service was themed around Up. We showed the clip of Carl Fredrickson floating away in his house, accompanied by an acoustic rendition of the old Gospel hymn I’ll Fly Away. Everyone at the memorial got one of the Grape Soda badges to pin on their shirt in memory of him. And then we all released balloons in the church parking lot and cheered.

Even at the funeral, though, I still remember feeling that twinge of conflict in my subconscious. Here we were, honoring my grandpa by playing clips from a movie where an old man goes on an adventure - and yet, my grandpa...never really...did that. Mostly, in the time that I really knew him, he just sat in his recliner.

Well, that’s what he did externally, anyway.

It was only in my rewatch of Up this week that I started to consider that maybe my grandpa had still maintained that eternal Spirit of Adventure in his heart, even when he was sitting at home. I don’t want to wear rose-tinted glasses, of course; there were aspects of my grandpa’s life that were undeniably boring and monotonous - and in many ways, in his old age, he really did stop externally pursuing that adventurous spark he’d once had.

But if there’s one thing Up is really about, it’s the idea that “adventure” is in those moments everyone takes for granted. Russell talks about his memories sitting on the curb with his dad counting red and blue cars. He says, “it might sound boring...but I think it’s the boring moments I remember the most.” Much like Carl, my grandpa’s real “adventure” was taking care of his wife and his family; equipping them for their dreams and inspiring them to live them out. Even when he was sitting in his recliner, he was always encouraging my aspirations, asking me about my YouTube channel, talking about history, giving me gifts and tools to pursue my vocations, and all those other grandpa things that good grandpas do. But these things weren’t incidental for my grandpa Jim. They were his adventure, and he delighted in it.

A few months after my grandpa’s death, my family went to Disney World with my grandma, Linda - his wife, now widowed. Mostly, we went because we wanted to take her mind off things and allow her to have a different Christmastime than the usual one at her house, where the absence of her husband would be painfully recognizable. The trip was really wonderful for many reasons - seeing my grandma talk to Rey about power converters at Galaxy’s Edge was one of them - but the highlight for me was meeting Russell and Dug from Up.

As soon as my grandma saw that she could meet characters from her husband’s favorite movie, her mind was made up. What she really wanted to do was get a photo with Russell, pinning a Grape Soda badge onto his chest just like Carl had done at the end of the film. We all scoured the gift shops to find one that was the right size, and then got in line to meet them.

I’ve always been a huge Disney World fan, but I’ve never been a big “character meet-and-greet” guy. I don’t think I’ve ever gotten a photo with Mickey Mouse that wasn’t painfully awkward at one moment or another. The fact that I’m interacting with a stranger in a bodysuit always sticks out.

And yet, seeing my grandma meet and hug Russell and Dug was shockingly profound. She smiled, she laughed, she pinned the Grape Soda badge on Russell’s sash, and she wiped her tears on Dug’s big huggable fur.

When I talked to the photographer while they were still meeting-and-greeting, I told her about how cathartic this whole thing was for my grandma, and how much Up had meant to my grandpa Jim when he was alive. The photographer said “some days, I have to remind myself that not everyone comes to Disney World for happy reasons. Lots of people are working through grief and sickness and pain just like everyone else. We’re here to help them heal.”

This is what Up meant for my family, and for me. When you put aside the corporate monopolies and greedy CEOs, this is what movies are meant to achieve in the world: empathy and empowerment and emotional catharsis.

I’ll never be able to watch Up again without being reminded of my grandpa. His legacy lives on, in a Grape Soda badge and a house carried by balloons floating away into the clouds.