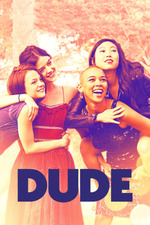 This piece of film is among the worst things I've ever forced myself to watch, which is saying a lot since I regularly watch car crash compilations. It has a focus on accepting change and learning to move on but presented in the worst imaginable way. Given that it's a 90-minute movie I can assume that there are 45 scenes involving weed.

The second half is where I started to regret my choices. Lily goes fucking bananas and decided everything has to go her way. The writers needed to show this character that this doesn't happen, so she gets assaulted. As you do. It was directly after this that they realized the quartet of main characters literally didn't call each other dude ONCE yet, so they spent the next 15 seconds making them say the word as much as they could. Blah blah blah, she comes to terms with it and then EVERYONE she fucked over APOLOGIZES TO HER!!!!! They were not in the wrong even a teeny tiny bit even a smidgen! Her friend doesn't go away to college and they're all friends again. What a beautiful ending!