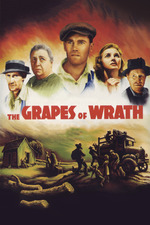 The Grapes of Wrath

Ok, so I have been wanting to watch this movie for a long time simply due to the fact that the book it is based upon is so highly regarded.

I have waited years to pull the trigger on this movie because I suspected it would be not a good use of my time and unfortunately for me I was right.

This movie did have about 3 good monologues scenes two of which is at the very end of the movie which I suspect is what is going to be most viewers' only takeaway from the movie. But don't be fooled. It is uninteresting 98% of its' 2H08M runtime.

The movie is from 1940 so it makes sense that it feels dated, but that doesn't really excuse it. I am a modern person so I demand modern quality. If you do not agree with me think of it this way. The next time you cook dinner just make yourself some garbage people ate in 1800 before modern-day cooking techniques were invented and then tell yourself "Oh, I guess this food isn't as good as what I usually eat but it is unfair to compare it since it is from a different time."

Let's start with the obvious. Besides Henry Fonda, the acting is pretty weird. There are just several characters in this movie that does not feel right. Especially the grandpa but I am unsure if that is a directional choice. To me, he just came off as certified insane and maybe that was the whole point?

Having dunked on the movie a bit let me say that I think food shortage is no joke and it is really something that is depressing to see and think about. But if you want well made depressive movies just check out Schindler's List (1993)