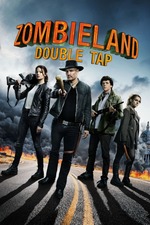 I don't know if this movie is that much worse than the 1st or if it is just a matter of no longer having the element of surprise that caused it, but I wasn't feeling this movie as much as I would have hoped based on the first one.

The character highlights for me were definitely Thomas Middleditch's Flagstaff and Zoey Deutch's Madison.

The Madison character was pretty good, but I might just be biased by she is the hottest as a girl can ever be in my opinion. The all-out pink outfit and on point perfect make-up paired with a dimwit but loving attitude. I think she was just supposed to be there to be laughed at and so everyone in the film and the audience had someone to take their shit out on, but frankly, she didn't deserve that. I really liked how Columbus ends up defending her. Yeah, shit might not be all brains, but she is a nice person.

Also, I don't know if if I got the whole "Madison pitches Uber concept" scene wrong, but I actually thought it was a pretty good scene as an example of when movies try to manipulate its' audience into feeling something they shouldn't. Madison isn't the stupid person in this scene, as we know Uber is quite the big company, yet they all chime in on how moronic she is and through the effects of an established reasonable groupe of people vs one established not smart person we tend to think the reasonable group is correct. But not in this instance. Either that or it was just a gag on how in their universe the Uber idea is stupid and I am just putting too much thought into it.

On the flip side, we have Avan Jogia who played Berkeley, who was more or less just the male version of Madison. And Berkeley was just straight up annoying and lame and probably everything I was also supposed to feel about Madison. I might just be love-struck and biased.

The movie's amount of cutaway scenes made me feel like I was watching Family Guy and while I sort of liked it when it played out I also think it was a bit cheap when thinking back on it. Overall I don't subtract nor add anything to the score from this because I did find it fine in this sort of movie.