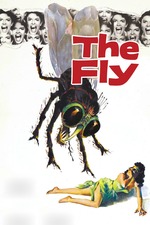 It's a shame most people know this story, know the punchline as it were - and have probably even seen images of some of the film's pivotal moments. But tonight I had the pleasure of sharing this gem with my children who really didn't know the story. They were riveted - and so was I.

Beautiful colors, stylish presentation. A simple story with Twilight Zone overtones. The scientist who meets his demise is a nice enough guy - but scientific hubris always leads to an ill end in these sorts of films. Vincent Price serves as the mild-mannered hero to an extent - but it is Patricia Owens who provides grist for the mill as the heroine. The only reason I'm not giving this film a full five-stars is, given Owens' character's sensibility, smarts, strength, and humanity, I think she would have gone for help rather than given in to her ill husband's frenetic wishes.

The film is full of wonderful, iconic images - including the reveal of the scientist's updated visage, Owens' scream as seen in the compound eye of the monster, and of course the last terrible moments of the scientist's reciprocal creation. Really delightfully creepy stuff!