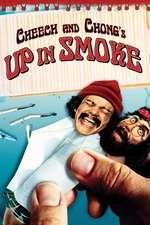 As revered among the cult crowd as it may be now, Up in Smoke was a movie destined to be misunderstood upon its initial release. Critics walked into it expecting a tight, fairly straightforward comedy from Cheech and Chong (a countercultural comedy team that had been performing for ten years together before the thought of making a movie crossed their minds), and instead got something that… wasn’t really that.

Some enjoyed it for what it was (the controversial Pauline Kael favorably compared it to The Groove Tube, noting that it was “also crudely done but is more consistently funny”), but despite the film making a ton of money ($104 million against a $2 million budget), most others were not so kind, with Gene Siskel naming it “one of the most juvenile, poorly written, awkwardly directed pictures I have ever seen.” Even so, the film still holding a “Rotten” score—50% at the moment, to be more precise—on Rotten Tomatoes is pretty mind-boggling to me… though not nearly as mind-boggling as the site’s first book, Rotten Movies We Love, not saying one thing about it. Not. One. Single. Thing.

I’m trying to come up with a logical explanation for why they ignored such a hugely trend-setting element of stoner culture so badly, but considering that the book covers movies that are “People’s Choice[s]” (check), “Ahead of Their Time” (double check), and even “Cult Leaders” (triple—nay, quadruple—check), it’s literally impossible. To ignore this classic—if, yes, flawed—comedy would be to ignore an undeniable part of American history, as well as the proud birth of a genre loved by rebels, college kids, and potheads everywhere. And that alone makes it heavy stuff, man.