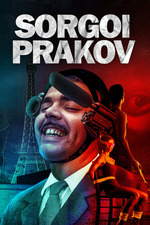 Descent Into Darkness: My European Nightmare 2013 ★★★

Descent into Madness: My European Nightmare is a horror movie. In addition to playing the lead, Rafael Cherkaski also writes and directs.

The "found footage" story is about Cherkaski, a documentarian from a small country between Russia and Belarus. With his mic and camera fixed to his head, and his Russian-area origins giving him a broken-English accent, this seemingly-goofy guy suggests a touch of Sacha Baron Cohen's Borat (at least, early on). Cherkaski travels to Paris, France to document if, like the American Dream, there is an equivalent, a European Dream. Although things begin well, the movie's title should provide more than enough of a hint as to what happens from there.

It's worth noting that the depiction of "the descent" comes across more as an intent to shock rather than a genuine sense of him believably losing his mind, with Cherkaski displaying such "he's crazy!" behaviors as playing with his own shit, laughing maniacally, messing with people, speaking gibberish, and of course that old staple, growing a beard.

Even though his behavior felt stereotypical, I appreciated the events of the movie's darker story such as, for example, the dinner with the family near the end. I can't say I connected with Cherkaski on any level, but I did respond to the desire to have the story unapologetically "go there," and I appreciated watching the escalating behavior, from goofy to primal (though it never quite reaches Nicolas Cage levels... thankfully?).

For those who like a slow build-up and an intense climax, the movie is entertaining. I liked it for that, but also because it explores extremes in a way I might once have tried to write (as an angst-ridden teen/20-something).