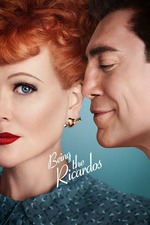 I LOVE LUCY as dissected by Aaron Sorkin, which means backstage incidents during the sitcom's legendary run get conflated, fictionalized, and compressed into one tense week (with flashbacks as to how it all began) and the whole thing's about as fun as hostage negotiations or grain talks with the Soviets. At times it's also weirdly anachronistic, with Lucy grousing about competition from Judy Holliday years before Holliday exploded onto the scene and the characters discussing the "infantilizing" of Lucy Ricardo, as if they're reading IndieWire and not Variety.

For end of year "old-timey Hollywood Oscar bait" it's more buzzy, in Sorkin's rat-tat-tat way, than, say, last Christmas' embalmed MANK, if par for the course, and J.K. Simmons and Nina Arianda are good casting and good company as William Frawley and Vivian Vance. They are, however, the second bananas, fronting the miscast leads. Playing someone as iconic as Lucille Ball is a thankless task and the hard-working Nicole Kidman grits her teeth and facial prosthetics and gets on with it, with steely, joyless resolve. (I don't think she gets a single laugh, nor is meant to. Comedy is hard!) Anyone who dunked on Ben Platt for being too old for the DEAR EVAN HANSEN movie should brace themselves for Javier Bardem's Desi, thick-set and more like Paul Douglas with a heavy accent than Ricky--still, his enthusiastic recreations of "Cuban Pete" and other Arnaz standards give the show a much-needed lift. Sour ending and all the Arnaz kids signed off on this, which suggests issues. (They weren’t much of a part of the TV “home” their parents made for themselves, a point that’s hammered…home.)

TRIVIA: This past summer my family stayed at Woodside, a (fabulous) Frank Lloyd Wright house in Marion, IN. I LOVE LUCY writer Madelyn Pugh, played in the film by Alia Shawkat, lived there in the Fifties and wrote some of her scripts from the property's cottage, which my kids stayed in. I looked but could find no trace of her work.