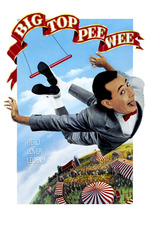 Geez, what a weird sequel and huge step down from Big Adventure.

Feeling like there was a much smaller budget and no "finesse technician" onboard, this one is riddled with flaws and held back by a mediocre story. What's worse is the absolutely awkward sight of Pee Wee getting his mack on with that 5 minute scene of him making out with Gina. I seriously thought he was asexual all these years?

Fortunately there is a talking pig with a hilarious voice on par with Bob from House By The Cemetery not to mention a handful of deliriously WTF scenes like when he gives all the adults hot dogs to shrink them into little kids.

Kind of a piss poor sequel but I had fun.