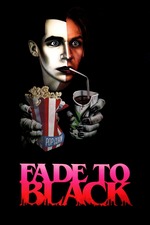 Fade to Black is hella charming, a quaint horror/drama in *character study* mode with some seriously fantastic performances.

Dennis Christopher electrifies this flick as Eric Binford, a movie-obsessed loser that is on his last days of tangible sanity.
Eric works at a film warehouse and lives with his cranky aunt and seems to not have a friend in the world... outside of James Cagney, Marilyn Monroe, and Hopalong Cassidy, of course. The world is pressing down on Eric's skull in slow motion and as we enter into his man-cave-from-hell existence it seems like the skull has finally snapped. With his first kill under his belt, Eric is free to dissolve his life into a complete nightmare of vengeance, bloodlust, and film fanaticism gone to illicit extremes. Grab some popcorn and dive in.

It's best to prepare yourself appropriately as this flick is fairly tame, throwing the slasher designation on it is way too misleading. Fortunately the production is solid and the acting elevates it enough that I actually could give two shits that not a single kill feels all that terrifying. It's Dennis Christopher who sells the whole damn package.
Once he jumps off the deep end, there's a sinister momentum that takes hold and every scene with him becomes incredibly captivating. He is operating from another plain of sanity and it is infecting the film with unrelenting entertainment value.

It's consistent, so long as you click into its frequency, but don't expect any type of air-tight plotting or satisfying structure. Instead just let go and cast yourself off with the current of demented psychotic agony. That climax at Mann's Chinese Theatre will make it all worth it.