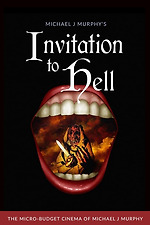 I knew this Murphy film was about the occult and such, but people had failed to inform me that there's a slasher in here as well.

Invitation to Hell has the production and lo-fi synth sounds of murderdrone with the budget ambition curio of American trash filmmakers. I love how accepting the main woman is of being captive to Satanists (or whatever they're supposed to be). Even at half the length of a regular feature there's enough sleaze to make it feel like a big ol' thing, and not just a pet project, though it certainly does look like such as a whole. I had a good time. Hypnotic at times. I would recommend to slasher completists and cult fans.