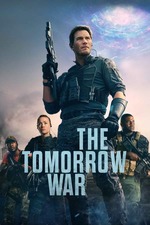 The movie is a bit solid...not bad-BAD but also not good. It was...an action movie. A very short one at that but then making it longer would have dragged it even though giving more insight into the training that all the 'future' people went through and how they built the time travel technology (if this was explained I'm sorry but the unequalised audio on the dialogue is reponsible for this). The future was far more interesting, that everything that was in the present.

The movie tapped into already existing films to try and make something unique. I don't mind this since there's nothing new under the sun but the take still, somehow felt a bit confused, in its packaging.

The CG for the alien species is super cool but then I'm not sure if there were budget issues, I would have prefferred more of them. The story was about them, but they appeared less in it. In most shots, they were captured from extreme long shots. Those establishing shots were great, but then it felt like the movie was teasing us a lot with that, which can get really annoying especially after the build up and the tease made these 'monsters' estremely huge and unbeatable.

The instrumental core was good and it piped up the movie from when the action picked up. One might find it extremely loud and the sound effects, way louder than the dialogue - but the dialogue was still audible though.

The acting in most parts was good, and Yvonne Strahovski carried her role to the maximum and she was amazing. Her line delivery on a scene with the likes of Chris Pratt felt more alive and visible. As for Pratt's acting?

Sitting through Chris Pratt's acting, is something that I never thought I would do outside MCU. The actor relies on his wit, humour and overly goofy personality and that's his biggest selling point. However, this movie took him out of that comfort zone, into a more serious feel. He was middle-class dad, that is dealing with real life issues in the present life. When he jumped into the future, everything felt like a massive shift.