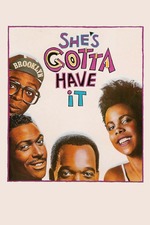 The spirit of the American indie film truly resides in the heart of She's Gotta Have it.

A relationship comedy about a noncommittal young woman and the three men in her life that ache to make her solely theirs, Spike Lee's debut is light, funny and vibrant (even in black and white!). It functions in different ways; as pseudo-documentary (not surprising, considering Lee's previous short, the thesis doc Joe's Bed-Stuy Barbershop: We Cut Heads), as a sensual tale of bodies in harmonious physical communication, but emotional disarray, and as a loving, lively representation of Brooklyn and the individuals that live there.

The central character of Nola Darling is meant to be an enigmatic, strong-willed woman, but she (as well as her suitors) lacks the necessary definition to make the dramatic tension work. The basic story lines are fun to follow, but don't add up to very much largely as a result of the thin characterizations. Similarly, the themes regarding gender misunderstanding, female agency, and male entitlement are interesting and invigoratingly addressed, but not enough so that the message becomes fully fleshed out.

Even so, Lee's film has a lot of heart and its good intentions and dynamic aesthetic approach keep it afloat. At 84 minutes, it's a bite-sized delight. There and gone in an instant, but remembered fondly for the smiles and positive vibes it evoked. Scrappy, soulful and entertainingly performed, She's Gotta Have it is an indie staple for good reason.