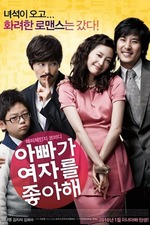 Laddy Daddy is about a super cute trans woman played by a cis woman who had a son with a girl back when she was presenting as a boy and now that the kid has come looking for his father she's decided to pretend to be a man and her adorably bad attempts at back passing are aided by her mutual crush who's like a costume designer or something and who doesn't know yet that she's a trans woman.

It's just a really cute fun wholesome lighthearted south korean romcom and I love it. I guess it would have been cool if they had cast a trans woman to play the main character, but I like the lady they got (I mean at least they didn't go with a cis boy) and it's pretty alright about trans junk.

Just watched it for a second time with a girlfriend (it was her first viewing) and she loved it too.