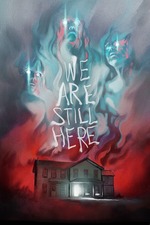 Oddly for a movie that ends with [SPOILER] buckets of blood and literal fiery demons, the word that kept coming to mind as I watched this was "charming." From the fantastic B-plus cast, to the early-80s redneck-New England setting, to the use of an old house that was a little creepy but still believable that people would actually move into (something most haunted house movies get wrong), I kept finding myself smiling at all the little choices this movie got right.

I also appreciated that unlike a lot of 2010s indie horror, the film is a terrific period piece (set somewhere in the late 70s/early 80s) but doesn't try to mimic the LOOK of a film from that era. The sets and dialogue give you the period feel, without resorting to Instagram filters and fake film grain. Also, the movie is filled with small nods to 70s horror (American and Italian, mostly) without being another hip reference-fest. If you get them, you get them, but if you don't, the movie still works.

Cinematography isn't polished, but it's good without drawing attention to itself, works to set the mood, and is actually lovely several times when depicting the snowy town and surroundings.

Lisa Marie and Larry Fessenden just about steal the movie as the protagonists' hippie friends who are willing to come visit and maybe clear their spooky house of its dark energy. The 2nd act of the movie, while they're around, is definitely my favorite part.

One of those rare horror flicks I want to turn around and watch again almost immediately.