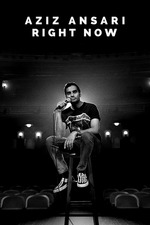 A looser, easily flustered Aziz Ansari has emerged from the debacle of his 2018 allegations. He hasn’t come away from the experience bitter or angry, but something has broken inside him, and for that this comedy special may be the most essential piece of 2019 content to mark our time. We see for the first time in our new era an artist who has been shunned, publicly ridiculed and pushed away from his craft return to it. He speaks on the time he was isolated from his art, how the isolation and rejection changed him, then, most powerfully, what it feels like to come back from the dead.

Death and growth are the primary focuses of Right Now. Aziz structures the special around our current time as a vessel for various personal developments. A notable bit details the relationship he has with his grandmother who is suffering through Alzheimer’s, which then segways into a larger statement about how we spend our time with the people we take for granted. These life lessons he’s getting at aren’t wholly original, and perhaps that could sour some people to the special given the gravitas he’s attempting to give them, but the context adds so much. Aziz is also going at the metaphorical death angle, namely his own in the fallout from his controversy. The same lessons he pulls from experiences with his parents and grandma he pulls from his experiences with being (#)cancelled. Theaters, movies, TV, comedy... audiences, relationships, time even... all “ephemeral”. You only have the moment you’re in and whoever you’re with in that moment. Simple. True.

I probably laughed the least in this than in any Aziz special prior, but I can’t fully fault the material for that because it’s part of the design fundamentally. The wild, exuberant RAAAAAAAANDY with 8 A’s Aziz Ansari is dead, and this special feels like the first time we’ve ever really met Aziz the human being in stand up form. Older, wiser, energetically restrained. He even goes back to classic bits from previous specials and analyzes them with new eyes, something I don’t think I’ve seen in comedy before either.