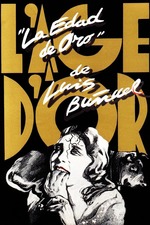 b rad’s review published on Letterboxd:

This is one of those films where I was surprised to find I hadn't actually ever seen it. I vaguely recalled some of the key moments (although not the shocking, brilliant climax) and considering Bunuel was one of the first directors I really watched a lot of as I was getting into film more seriously it's strange that this one had eluded me so long. But, the TL;DR of it is: it's pretty fucking great.

In the shadow of Un Chien Andalou it might pale ever so slightly - the impact of this wasn't as strong and at over twice as long, it's not as consistently eye-popping (ha) as the former. This drags a bit through some sequences, but it's still heavy on a rare virtue - the ability to produce arresting images that viscerally shock and seduce even now. There's psychosexual undertones bursting off most scenes with a main couple trying to consummate their relationship, interposed with all sorts of other vignettes. There are unforgettable images throughout and as I hinted at earlier, the final scene is so outrageous it really has to be seen to be believed. Mandatory viewing.

b is using Letterboxd to share film reviews and lists with friends. Join here.