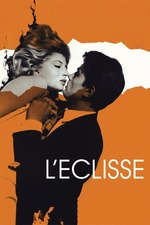 L'ECLISSE begins almost where LA NOTTE ends, as if in temporal continuity with the same sleepless couple who had just begun a terrible breakup at the end of dawn, and who now are ready to finalize it in the morning. We move from a cold marriage to a doomed love affair, with a surprising, almost shocking center that plays into genre in ways that I wasn't expecting at all. Is this a love story set against a post-apocalyptic backdrop? Is it a romantic break-up with hints of science-fiction and extraterrestrial intrusion?

Let's unpack these questions and try and make sense of what's happening here.

For starters, the modernist architecture on display is a major character. There's a futuristic bent to these buildings rooted in a kind of postwar malaise that screams reconstruction, but the buildings themselves haven't yet overcome the aftermath of world war nuclear attack. As a result, they're cold, half-finished structures that mirror the cold, half-finished society of people who made them, who now greedily turn to the stock market to secure the wealth that had been stripped from them during the war. The stock market sequences are long and loud, but not without purpose. These images are all about cash and consumerism. There's a feeling of voracious hunger and cacophonous craving in the room, as if stepping into an entrepreneurial church devoted to the cult of money. Money, not scripture, is what this private-plane, fast-car generation believes in. Money is their god, their savior, the thing that will keep them from living a hand-to-mouth existence, or worse, returning to the primordial soup. And for a country just stepping out of a nuclear arms race, this makes sense. It's all material rebuilding at this point, with spirituality at the opposite end of the universe.

The feverish obsession with money and material goods has been augured in the architecture, pitting humans against objects in ways that threaten anyone who wishes to ever connect or fall in love. Enter Piero and Vittoria. The architecture and landscapes seem to have a profound effect on them, at times even swallowing them up in a sea of alienation. Antonioni uses the metropolitan decay to express their psychological states. He eerily frames them through doors and windows, blocking their ability to kiss or connect in meaningful ways, always keeping them suspended in a state of bone-deep dissatisfaction as they hopelessly grope towards one another. Their lives are empty and purposeless aside from the thrill of striking it rich, or staging another one-night stand. Piero and Vittoria reflect the larger postwar anxiety that pit millions between the promise of reconstruction and the threat of it all being taken away in an instant by atomic annihilation. This is what the impossibility of love looks like in the age of dehumanized technology. Two people trying to connect during the apocalypse, each petrified by the impossibility of involvement, commitment and covenant.

On the surface L'ECLISSE is a mysterious love story about this longing for connection in the age of shallow materialism. Piero and Vittoria are such pawns of privilege — the former with his greedy addiction for day-trading, the latter with her dated portrayal of "blackface." Antonioni never looks approvingly on their advantages, first critiquing Piero's engagement with cutthroat capitalism, and second reproaching Vittoria's casual racism in what will later come to pass as a future punishment. Speaking of future punishment, the way in which these two battle with the unseen effect of their privilege seems to culminate with sci-fi, twilight zone mood, as the final seven minutes of the film become some of the most staggering moments cinema has seen since, do I dare say, 2001.

It's hard to describe what exactly happens in those final seven minutes, because we're no longer given access to the familiar world these characters have traversed all along, let alone the characters themselves, even though we've been prepared for these moments since the beginning. Antonioni daringly switches from narrative to avant-garde mode. He's trying to capture thoughts and feelings that narrative can't articulate, and in doing so he allows the camera to just linger on a series of images that draw up the intended effect. Empty streets, spooky sidewalks, and underdeveloped buildings carve out the frame as if forgotten relics of a bygone era. The roaring sounds of the stock exchange are replaced with the chilliness of silence. The city has become virtually a ghost town, with very few people dotting the land, none of which are the lovers of this story. It's so strange and jarring, especially since we were just with Piero and Vittoria moments earlier.

Where did they go? Why did they vanish so suddenly? Did Antonioni take them to the same place where Anna disappeared in L'VVENTURA (1960)? We're paralyzed by the ambivalence of it all, shrouded in a thick veil of poetry that keeps us wondering. Maybe Piero and Vittoria's doomed connection was bound to evaporate in a cloud of smoke. Or maybe this post-apocalyptic landscape is telling us a thing or two about that frightening 20th Century feeling of when it became clear that, from now until the end of the world, we would forever live with the fear of being utterly obliterated with basically no warning whatsoever. Nuclear fallout, as we've seen, has already eaten away at the architecture. We've also repeatedly seen that mushroom-like tower resembling nuclear holocaust, the same tower which our lovers were framed besides several times. The environment all along has forewarned the apocalypse of human indifference, human coldness, and human oppression, and it is this same apocalypse, smothered in cash and consumerism, which climaxes in the final seven minutes with such strange, frightening power.

The fear of annihilation, like the fear of human-to-human paralysis, is embroiled everywhere.

Maybe that final frame of the lamppost burning brighter and brighter portends human extinction, but maybe it also portends new alien life elsewhere. I have no idea.

I only know that this film kicked my ass.