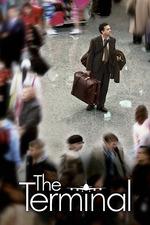 A misfire in Spielberg’s career so strange I’m not even mad, I’m simply amazed. What is this film even doing? Is it fable about the immigrant dream? A romantic sitcom? Satire of an overwrought bureaucracy? Opportunity for Starbucks, Borders, and Burger King to leverage more advertising power? Is it trying to offer political commentary on failed immigration policies and institutional oppression? If so, the schmaltzy, feel-good comedy completely undercuts that pathos. Maybe it just wants to go for sentimental romance and sappy soap opera sketches? If so, the story of a guy displaced from his homeland, stuck in an airport, and labeled “unacceptable” by the U.S. feels cheaply observed and remarkably underrepresented.

The trouble is the film doesn’t know what it wants to be, and if it does, it’s far too tone deaf and situationally awkward to stick the landing. Moments of genuine emotion (like Hanks realizing on TV his country has fallen to a coup, rendering him stateless) are immediately gouged out by bad jokes, absurd slapstick antics, and truncated love stories that don’t even make sense. We’ve got a janitor who likes to watch people slip on his freshly mopped floor, Hanks going Picasso with mural paintings, some rando who falls in love and marries a trekkie immigration officer, an evil administrator who hates the little guy, a non-chemistry fling between the leads, and behind all this silliness there’s a man without a country who yearns to reconcile with his father. What? LOL. I mean, some of this is classic Spielberg territory, but the film literally breaks under the weight of its own disjointed focus, rendering the whole thing enormously inconsequential. It’s all over the place and doesn’t know where to look, which is rare for Spielberg to miss this wide.

Hanks, good actor + awful accent = terrible casting choice. He deserves far better material than this. The funniest joke of the film? The 2-hour runtime that ends up feeling like 12. Maybe I’m missing the entire point and it was always meant to be a Capra/Wilder homage that intentionally veers between sentimental cheese, broad cartoonish humor, and serious social commentary. If so, I’ll lend it some teensy credit it there. But boy, this thing is wonky and ridiculous by late Spielberg’s standards. It would’ve nicely fit somewhere between 1979–89, the years that gave us 1941 and ALWAYS, two silly titles I actually found myself nostalgic for while watching. Just a strange, strange film. If I’m gonna say anything nice, Spielberg continues to prove his thematic legacy of making films about aliens that just want to go home.