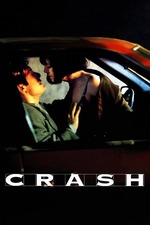 CRASH was my favorite film of 1996, so I wondered how this film would hold up as I hadn't seen it in at least a decade. Perhaps my high praise for CRASH at the time was attributed to my appreciation of Cronenberg's films or some early 20's inner-perv.

But it did hold up. And considering the state of the world I wonder if it's an even more relevant a film now than it was then. Don't get me wrong. I'm not saying that traffic-accident fetishes are more the rage now than they were 23 years ago. However, few films speak to the subtle and psychological nature of indoctrination, addiction, obsession, and niche-interest-personal-connection as Cronenberg's CRASH.

James Spader and Deborah Kara Unger are a very (like very, very) open couple who are totally trying to figure out what they best need to get their freaks on. When Spader has a car accident, he gravitates toward a weird little world of traffic-accident junkies after meeting a couple of these oddballs during his hospital stay (Holly Hunter--Mrs. Incredible herself in her first role to feature ample flexibility--and Elias Koteas who is more or less an Auto Club Cult leader). As Spader's body heals, he finds a connection with car-crash-erotica. Somehow his car accident becomes an emotional high-water mark that also serves as a turn-on (I know how it sounds, but it actually seems somewhat viable in the film). Meanwhile, Deborah Kara Unger is exploring what exactly is her big turn-on is. It's not bent-up metal, but she's game to try anything. Her thing seems to be risky, dirty, grimy sexual taboos, so there's plenty for her to explore with Spader's new carpool buddies.

CRASH is an interesting film because it seems to wish to avoid character development--at all cost. Who these characters are would be points of discussion well outside the realm of what CRASH delves into. Cronenberg and this script seem solely interested in how fetishistic thinking materializes--or for that matter any belief or ideology--even something as gaudy as car-crash eroticism. Some drift into belief systems through a natural exposure to the world (Spader). Some are shown it, support it, but don't 'get' it (Unger). And others are bizarrely iconic leaders of the movement (Koteas). In an online world, there are social media niches out there for every little interest, and CRASH is a bit of an insight into how peculiar belief systems gain membership--and momentum. Incels, anyone? The end of the film features brief disturbing dialog that beautifully summarizes this and reflects regret about getting in too deep.

"(at once referring to the traffic AND friends, family, peers) Where is everyone? They've all gone away. I want to go back."

Cronenberg uses a haunting and memorable score to help string the sex scenes together. Further there are a few unforgettable moments amidst the vehicular chaos (the James Dean car crash narrative and recreation chief among them). And somehow with years and years of conventions and traditions in how to film sex scenes and car crashes, Cronenberg avoids them all, capturing through the shot sequences, editing, and sound entirely original sex and car accident film sequences.

Not for everyone, but it's one of Cronenberg's best films with much to say despite the minimalism of character and simplicity of the surface concept.
A