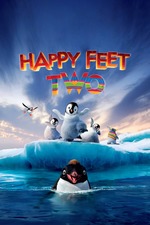 when people first reported to me that brad pitt plays a gay krill in happy feet 2, i assumed they meant implicitly. like he’s extra flamboyant or he drinks iced coffee or he sees matt damon krill wearing his jacket and says “keep it, it suits you” before biting his tiny krill lip.

never would i have guessed that the gay krill representation would actually be explicit. the damon krill says “don't you long for the patter of a thousand tiny little feet?” and then asks the brad krill if he wants to adopt kids! they call each other partners!! they briefly split up and brad krill mistakes his own reflection for his lover’s, causing him to curl up in heartbreak and spend the night yearning!!!

however, brad krill is also made to sing numa numa, which is somehow homophobic. you can’t win ‘em all