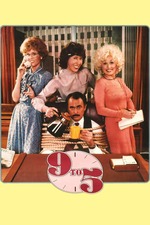 bloody, dramatic female-driven revenge stories like Kill Bill, Revenge, MFA, Gone Girl, etc. have arguably managed to carve out their own little niche in cinema. they’re cathartic and ruthless — evoking the raw fury of women scorned, the fury we’re taught to stuff down so deep inside of us and to hide with a phony, plastic Barbie Doll smile. as much as i love these films, and as necessary as they are, they’re not relaxing to watch. it’s not pleasant to see women physically abused onscreen — even if their abusers later get their own, more violent, comeuppance.

so much of my time and energy is spent feeling hopelessly pissed off, especially in this political climate, and sometimes i need to CHILL! i need to laugh with my gal pals as jane fonda, lily tomlin, and dolly parton smoke a joint onscreen while indulging in their whimsical fantasies about enacting vengeance on their “sexist egotistical lying hypocritical bigot” of a boss! the ability to extract the humor out of the absurd shit that plagues society is a vital survival tool — we can’t be in Serious Protest Mode 24/7 or we’d lose our minds.

if i ever made a movie, i’d want it to be just like this one — a feminist screwball revenge comedy with a catchy original song that ultimately provides viewers with a sense of hopefulness that change is possible!

Wallace & Gromit: The Curse of the Were-Rabbit