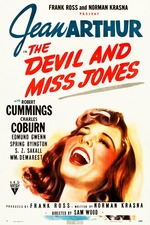 The Devil and Miss Jones

obligatory review so i don’t get yelled at for not talking about Movie: cute! ardently pro-labor + unionizing — impressive considering it’s a studio film, and how the director and male cast were all conservative (not my girl jean arthur tho 😊).

ok speaking of jean! because she’s what i’d actually like to talk about! recently realized i have such a gargantuan crush on her because she looks and speaks so similarly to gillian anderson, noted bisexual and one of my sapphic awakenings. that epiphany set off my gaydar so i went to jean’s wiki page to scour the personal life section — found out she was “intensely private,” had 2 husbands but divorced them, and then lived alone for the last 40 years of her life. hmmmm ... ok ..... this led me to google the fated three words “jean arthur lesbian?”

You Can't Take It with You