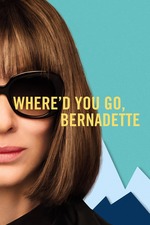 my gf parker posey could’ve saved this movie and i wrote about why for Much Ado About Cinema:

Throughout the entire runtime, I found myself unable to stop thinking about the woefully underrated Parker Posey. A passage from her (admittedly not great) 2018 memoir, You’re On An Airplane, came to mind in particular. Posey had worked with Richard Linklater in the past on Dazed and Confused (1993), and she’d remained in touch with him over the years. During the New York premiere of Linklater’s film Everybody Wants Some!! (2016), Posey ran into Semple at the after-party. “I told her I loved the script, and how rare it was to read something where the characters feel like you and your friends,” Posey wrote. “She was super nice and said I was on the list of actresses to play the nemesis of Bernadette. I was more right for the lead, I told her, but knew how the system worked.”

From a capitalistic marketing standpoint (😔), this choice makes sense – Blanchett is an undoubtedly talented household name with two Academy Awards and loads of star power under her belt. Her revelatory performance in Manifesto (2015), a one-woman feature in which she played 13 different characters, demonstrated her versatility, and there are very few roles she can’t pull off. Unfortunately, the manic Bernadette is one of them. A dignified air hovers around Blanchett, and she seems to restrain herself from going full camp instead of embracing it. Her delivery rarely lands, and the blame can’t really be placed on the source material since the book is genuinely funny (Semple has written for Arrested Development, Mad About You, Ellen, among other sitcoms). Posey, on the other hand, has a clear knack for camp – I stand by my opinion that her antagonistic role as deeply insecure fashionista executive Fiona in Josie and the Pussycats (2001) is one of the greatest comedic performances of all time. Last year in Portland, a bar hosted a Parker Posey-themed drag show. You don’t receive that honor if you don’t exude camp.