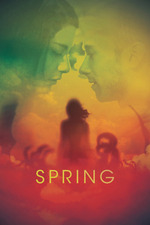 This is an awesome hybrid of horror movie and indie rom-com, it's the kind of movie where the less you know going in the better so if you haven't seen the movie and don't want to be spoiled probably better to stop reading now.
The first part of the movie plays like something out off In Search of a Midnight Kiss or Richard Linklater's Before trilogy as Lou Taylor Pucci's troubled Evan, after watching his mother slowly die of cancer decides to escape his miserable life in L.A, leaving behind his only friend (a scene stealing Jeremy Gardner) and go off backpacking in Italy. Once there he hooks up with a couple of English traveler's (the bonding scenes between the three blokes provide a good deal of humour) and they end up in a small tourist village on the Italian coast. This is where he meets the exotic Louise (the beautiful Nadia Hilker) and a love story starts to blossom between the pair. However, all is not as it seems as Louise has a deep, dark secret and the film takes another turn that's reminiscent of Cronenberg's The Fly.
This is a real visual treat of a movie with the Italian coast looking spectacular, all bright, vibrant colours and the two leads are both terrific, sharing a unquestionable chemistry. This is an engaging and well written love story with a brutal twist in its tail and as the end approached i found myself desperate for a happy ever after ending. Did i get my wish? watch the movie and find out, highly recommended.