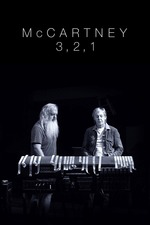 I often wonder if artists that we now revere as legends realize the impact of their work in the moment, when they’re recording it or writing it. Do they know that they are changing everything- music, lives, everything with those notes they are playing, those words they are writing?

In McCartney 3, 2, 1, Paul McCartney takes a beautifully intimate journey through his music alongside producer Rick Rubin, and besides being gorgeous, impactful, and in equal spades heartwarming and heartbreaking, it gave rise to these questions again. Paul attributes coming up with “Yesterday” to magic, yet it’s a song that endures like few others, even within The Beatles discography. Did Paul realize what he was on to when he first heard that melody in his head?

The best part of McCartney 3, 2, 1 are the little moments, the ones where Paul is listening back to his songs and clearly understands and appreciates how good they are, not because he made them but because they truly are among the best ever made. That bit when he is just lost in the moment, swaying along to the changing movements in “Band On the Run.” The way he still looked completely blown away by “Maybe I’m Amazed.” The way Paul says “Alright, come on Johnny!” after Rick Rubin reads him a beautiful quote praising his playing to the highest degree and reveals it was from John Lennon. Seeing him tap his foot and mouth the words along with his much younger self and his former band mates. Paul reminiscing on the incomparable beauty of “Here, There, and Everywhere” and John’s rare praise for it. The way he just shrugs at the very end of the documentary after he has played that final chord of “A Day in the Life.” All of these moments will stick in my mind and heart.

If you’re a Beatles or Paul McCartney fan, this is clearly for you. But even if you just love music and the process behind creating it, this is a must-watch. Music is the closest thing we have to practical magic- we can’t see it yet it is all around us and can conjure up emotions and whole worlds. This is a magic McCartney and Rubin understand and that makes this a singularly enjoyable and moving documentary.